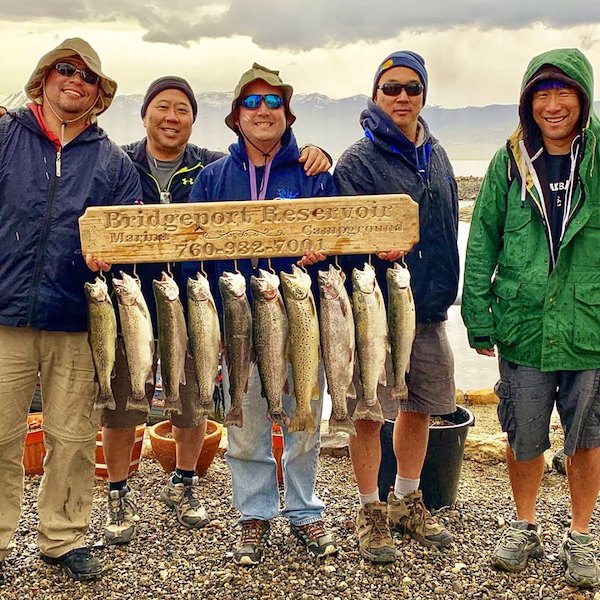 Although blustery Sierra winds have been the norm this week, the BFEF tagged monster trout just keep coming out! Gene, Mike and Paul of Encinitas, Lakewood, and Torrance, CA nabbed some nice ones, including a tagged 3-plus lb. Rainbow while fishing with worms. Mike Lobsitz of Westminster, CA bumped the Big Tagged Fish bar up a notch when he hauled in a hefty 4.19 lb. Rainbow using a Carolina rig and nightcrawler. Fred Gonzales and Jim Banda, who jokingly referred to themselves as “the fishermen from Hades” (okay, they used a different word but this IS a PG report), cooked up a batch of homemade mouse tails using marshmallows and crawlers and parked near Buckeye and Rainbow points to load up their stringer with some plump rainbows. Rumored to be then new-owner Chase Pasley’s first “official” customer, Kevin Shiotani of Thousand Oaks showed everyone how it’s done by trolling nightcrawlers to load up on a limit of rainbows plus one bonus Sacramento Perch. His impressive stringer weighed a total of 14 lbs., the largest of which came in at 3.2 lbs.

Keeping up in the custom-made bait department, Robert Mudarri, Paul Kropp, and Joseph Barnett of Sacramento fame fashioned their own “rat’s tails” using plastic PowerBait worms and eggs to catch several fish, including a 3.7 lb. Rainbow. Cole, Chase, and Daniel of Los Angeles linked up with local guide to snag a 2.6 lb. tagged trout while trolling nightcrawlers. One of the biggest hauls of the week was brought in by Torrance and Gardena residents Michael Kim, Sid Murai, Paul Inabu, Bruce Ishida, and Mike Hashimoto. Together, they netted a 3.6, 3.2, 3.4, and 2.9 lb trout, two of which were sporting BFEF tags and one of which was a nice Brown. The companions didn’t stop there, rounding out their heavy stringer with a total of 15 VERY NICE rainbow trout. Ron Rotzin ventured out with his son Jessie, pals David and Paul Duran and snuck in a nice tagged Rainbow just under 3 lbs. with several other trout for a total of five trout. They were super excited at their catch, and even more so when the mysterious Viking photo-bomber from Fishin’ Mission popped into the picture!
Aubrey Greer of Lompoc used a pinched nightcrawler with a sliding egg sinker and a VERY long three-foot leader to nab a nice 3.3 lb. TAGGED rainbow. Likewise, Dennis Sullivan of Pasadena used an inflated nightcrawler to snatch up his own 3.7 lb BFEF tagged trout. In addition, buds Dan, Ken, Mitch, Adam and Kyle, all from the surrounding San Gabriel valley, managed to bring in a few for the fish fry while still looking pretty fine themselves! So maybe he did not match the San Gabriel boys in all of their bronzed glory, but John Hays of Cobb, CA DEFINITELY got top honors for BIG fish glory this week when he hauled in a 2017 purple BFEF tagged trout weighing a hefty 8 pounds! All due to a trolled nightcrawler (and maybe a few hints from bro-in-law Don Whisnand), John has definitely set the bar high for the coming week’s aspiring anglers! 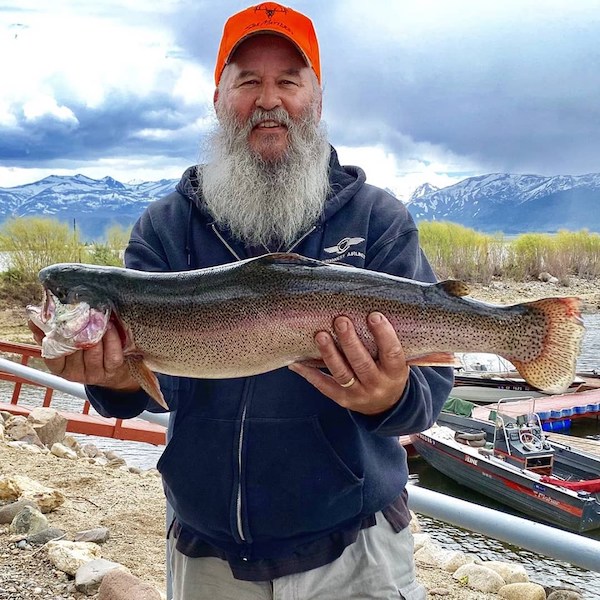 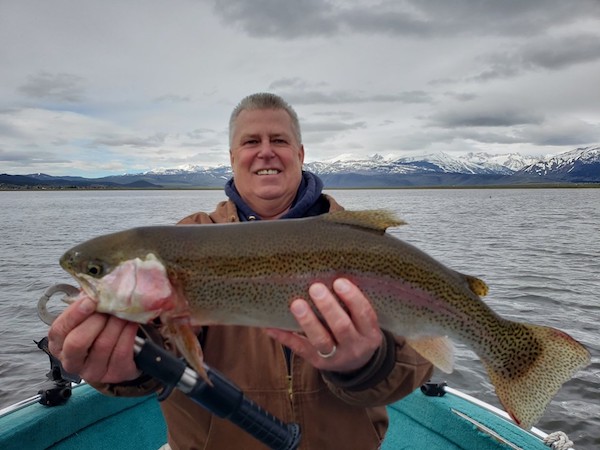 5-29-2019
Hooweeee! The Sierras are having a hard time getting into the “spring” mood, serving the reservoir up with rain, snow...... Read More