Crowley is open and fishing off the charts! 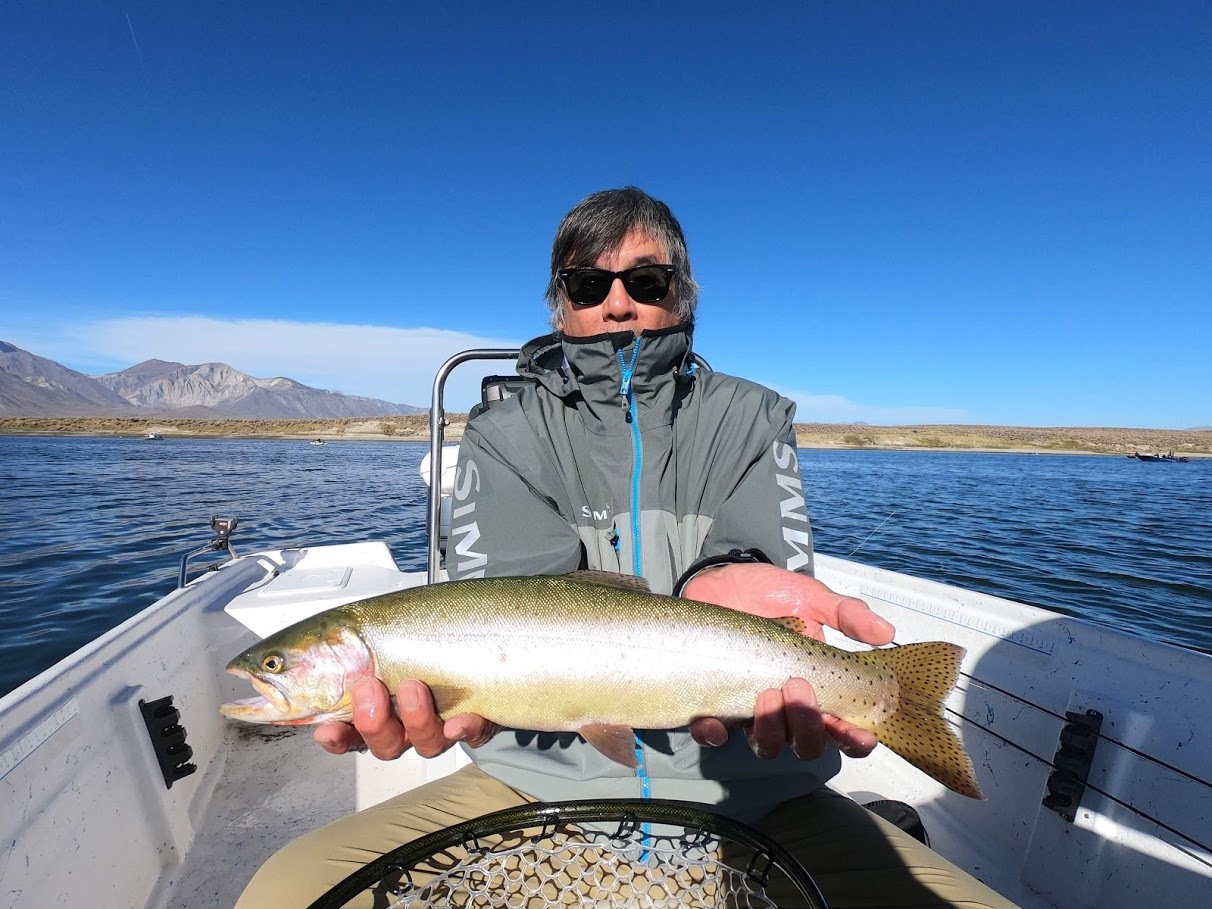 Lahontan Cutthroat
Yesterday was a little chilly early. You can see the smoke cloud rolling in yesterday. (you can see my coaching paid off!)
Photo Credit: Jim Elias

All national forest lands are closed! No Camping, Fishing, or Hiking! If you're camped at a private campground, there are NO campfires allowed in Mono County! Currently the only fishable water up here is on LADWP property including The Owens River, Crowley Lake, the Gorge, Pleasant Valley Reservoir, and the Lower Owens. Everything else is on Forest Service Land ie Hot Creek, The San Joaquin, Mammoth Lakes Basin, The June Lake Loop, and the East Walker River. Moderate temperatures expected through the weekend, with dense smoke in the area until at least early next week. The Creek Fire is about 20 miles from the Town of Mammoth Lakes.

The Lake is down about 10-12ft now and dropping fast! Water is pretty clear. Surface temps are cooling, only getting up to about 67-68 mid day.  Bottom temps also on the decline to 62-64ish in most places.  Algae is starting to get bad again in most places on the lake.

I had two last minute cancellations for this coming weekend because of the wildfires.

If you're interested in fishing Crowley this weekend, let me know or click here to book online.

I've added two new fly samplers to the store. As before, get 12 for the price of 11.

The lake has been dropping at a rate of a couple of inches a day. Water is getting pretty green in most places depending on the wind. Most of the fleet has been in McGee up until today. I was finally discovered yesterday up in the North Arm. Had it mostly to myself with a handful of float tubers the past couple of days. Today was a different story though with boats and tubes all over. The good news is the fish are spread out, and you don't have to be clumped up on any one spot to get grabs unlike in McGee where you need to be fairly close to the remnants of the channel to get fish. The fish are spread out enough to the point where if you see one or two on your screen, it's good enough to toss the anchors over. In shallow water (less than 10ft) your fish finder can only see a cone that's maybe half the width of my boat. So they're there, but outside of your fish finder's view. I've been fishing anywhere from 8ft all the way out to like 14 and getting consistent grabs. Mostly on larva patterns early, and make sure they're flashy! The more holographic tinsel the better. I've been running them maybe 6-8" off the bottom. You'll eventually see a bunch of midges flying around in a cloud around you. That's the time to switch it up. We were getting grabs on almost any pupa pattern I tied on the last several days. Just make sure you bring it up off the bottom like 12-18". Otherwise the fish will swim right over it, and you'll change flies when you really should be changing your depth. If you stop getting grabs all of a sudden, play around with the depth instead before you start changing your flies! Don't forget your alternative meals up higher on your rig. Got plenty of grabs on the middle and upper flies when I was running Callibaetis patterns too. 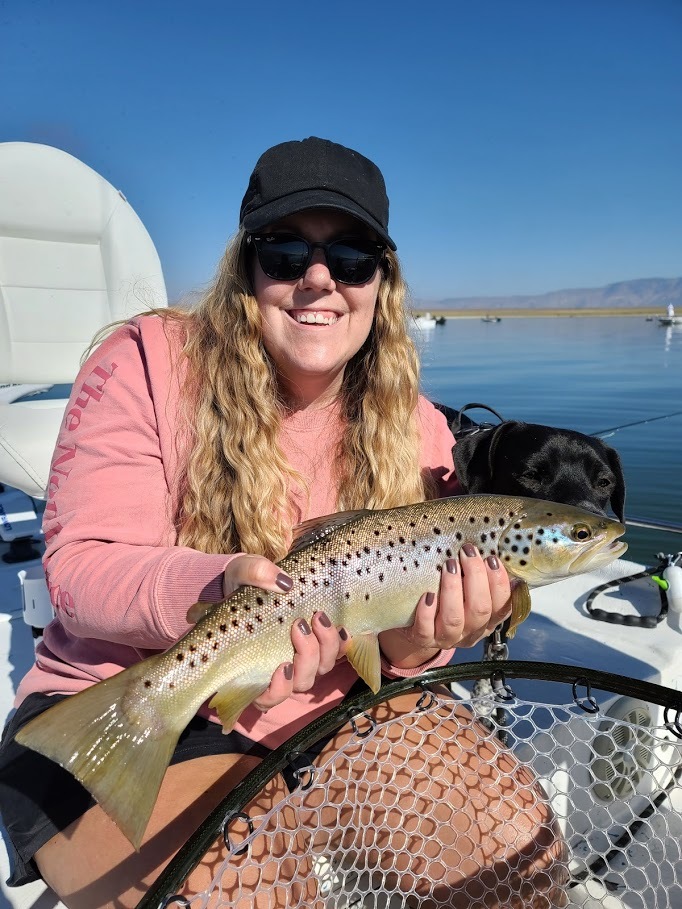 Alexis Laughlin from Newport Beach with her first fish on a fly rod this past Friday.
Photo Credit: Jim Elias 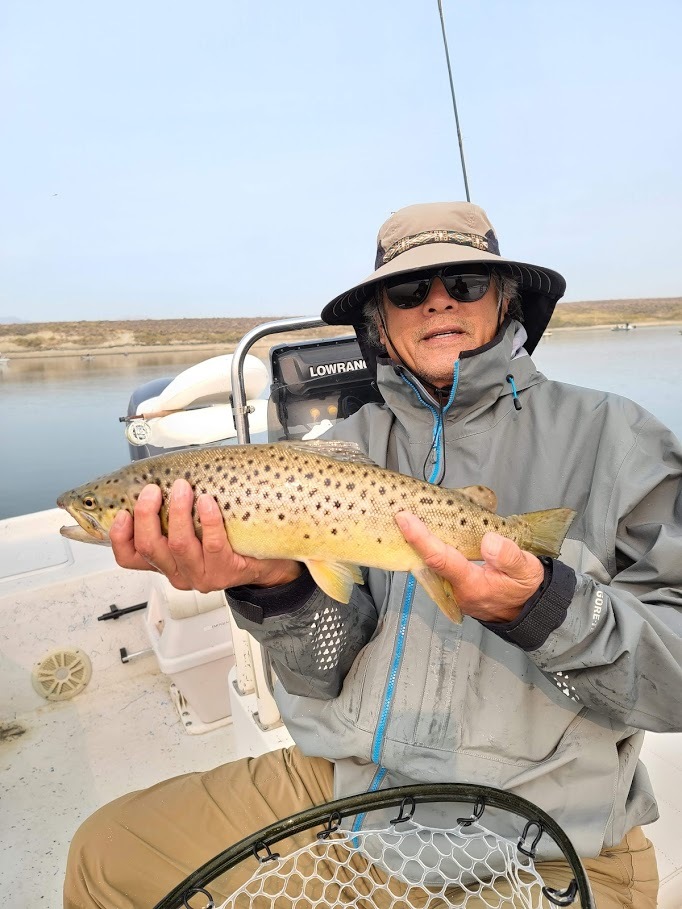 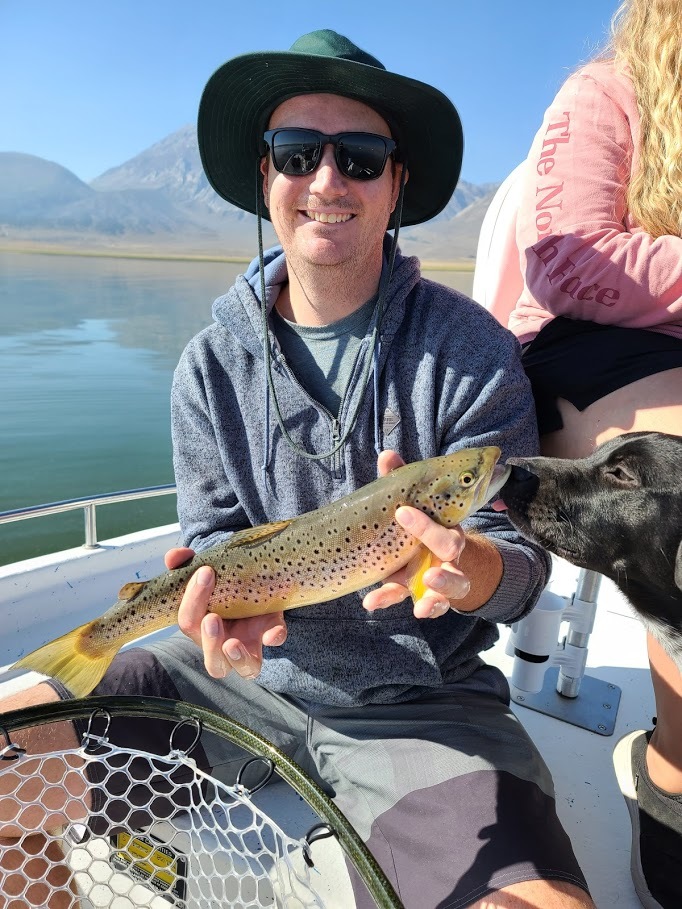 Not to be outdone, Kyle Bamberger with his well deserved Brown, also in McGee this past Friday.
Photo Credit: Jim Elias 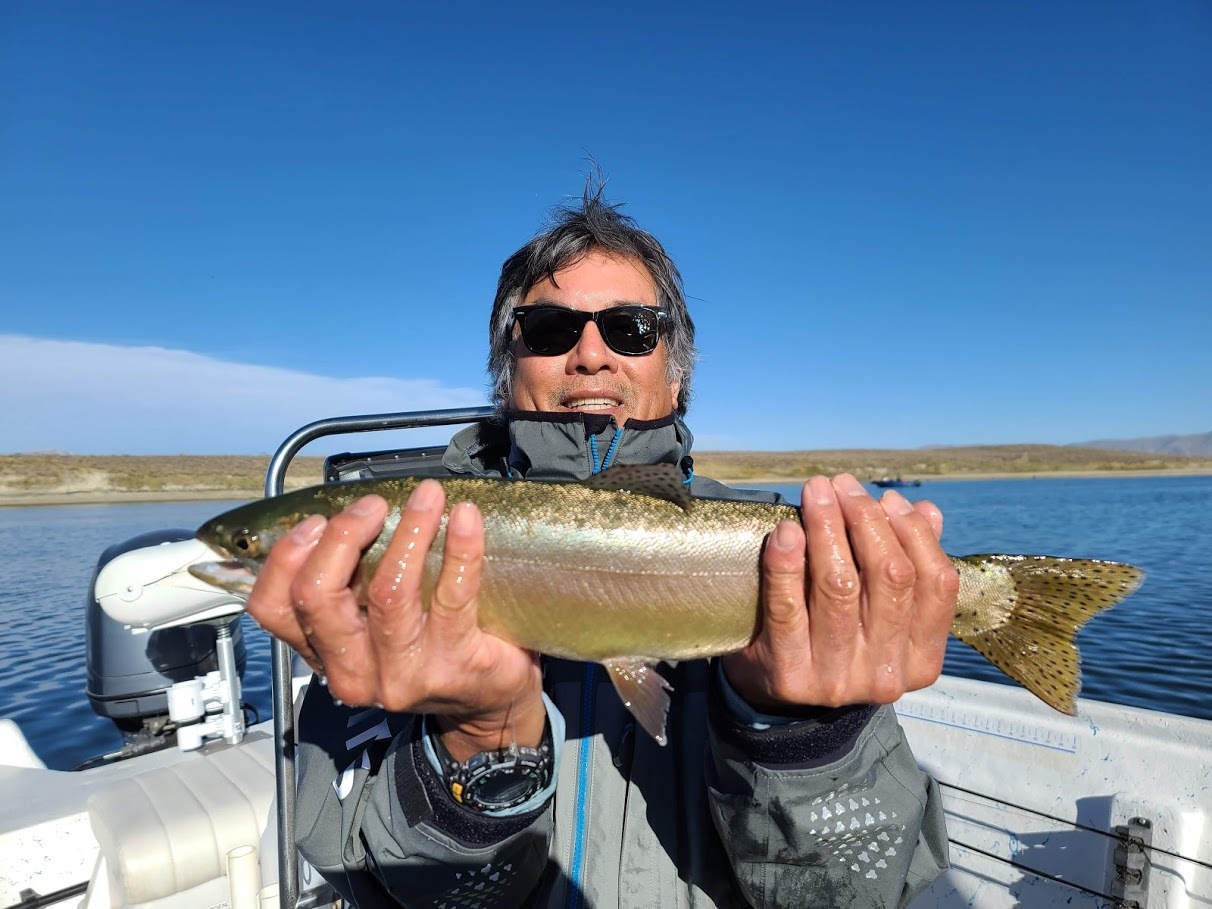 After this photo, I coached Richard into the proper way to hold your fish. I told him "let me see the fish not the back of your hands"
Photo Credit: Jim Elias 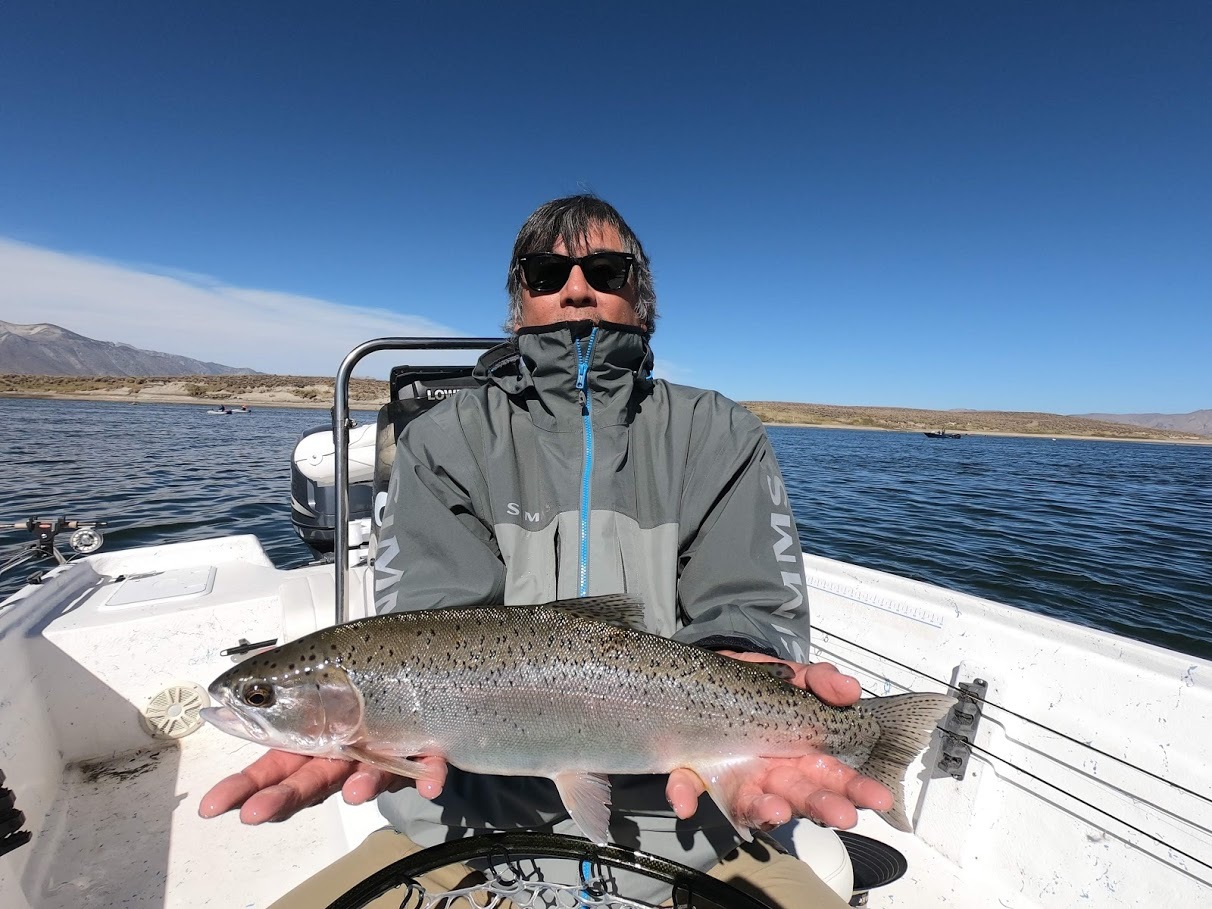 Managed the slam on Wednesday, but I didn't get pics of the brown... (lazy guide I know)
Photo Credit: Jim Elias 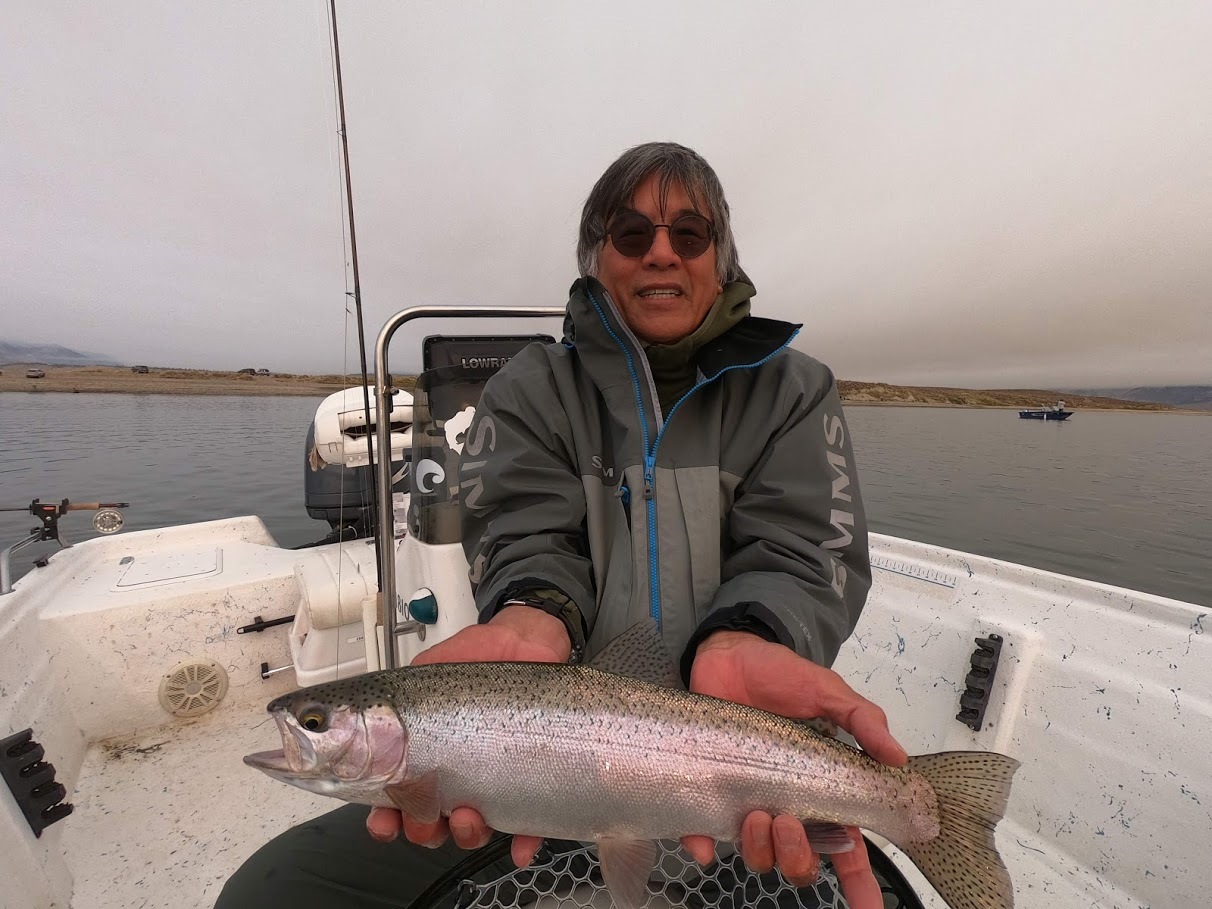 First thing this morning he hooked into this missile! This thing came out of the water several feet. Richard told me jokingly "I'm done, We can go now" after that (5 minutes into the trip)
Photo Credit: Jim Elias 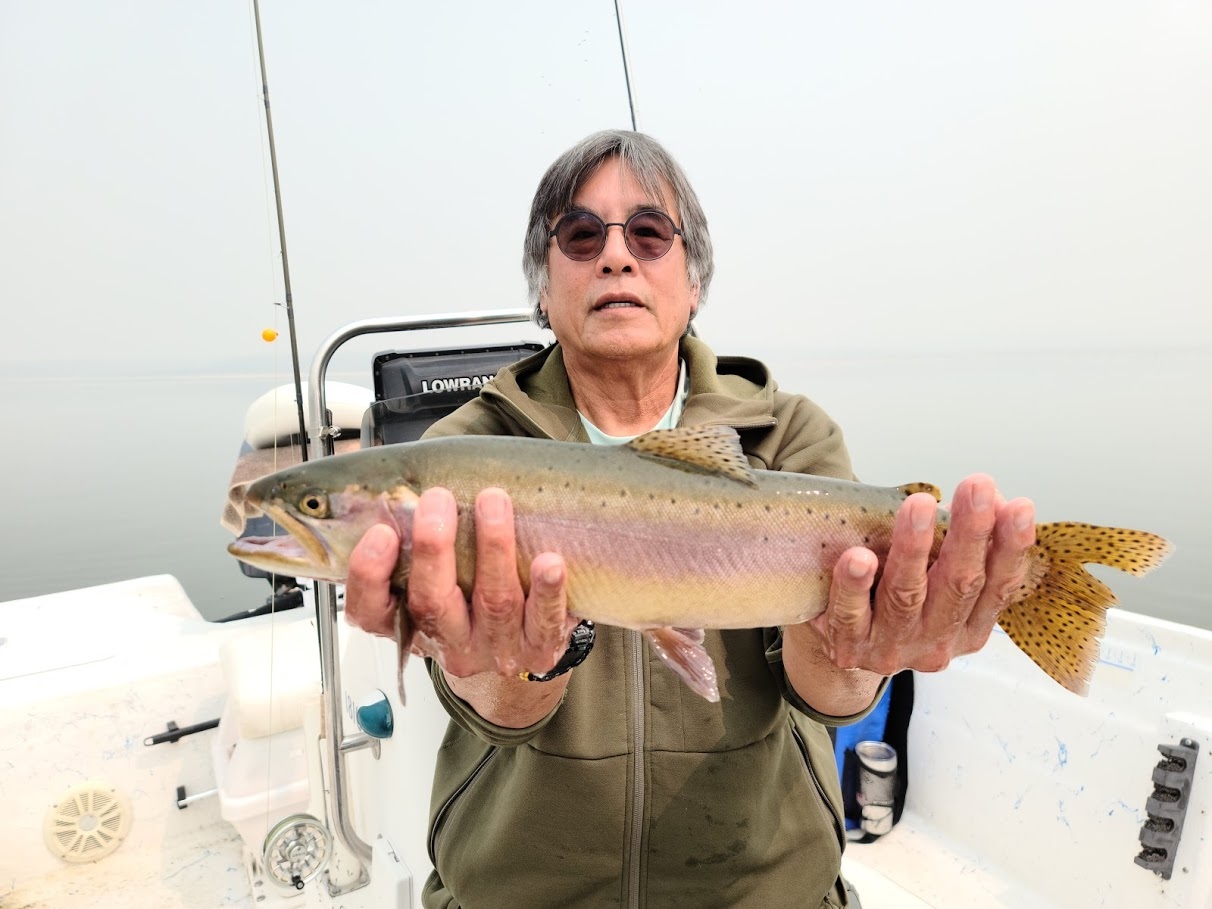 Glad we stuck around for an extra 5 minutes!
Photo Credit: Jim Elias