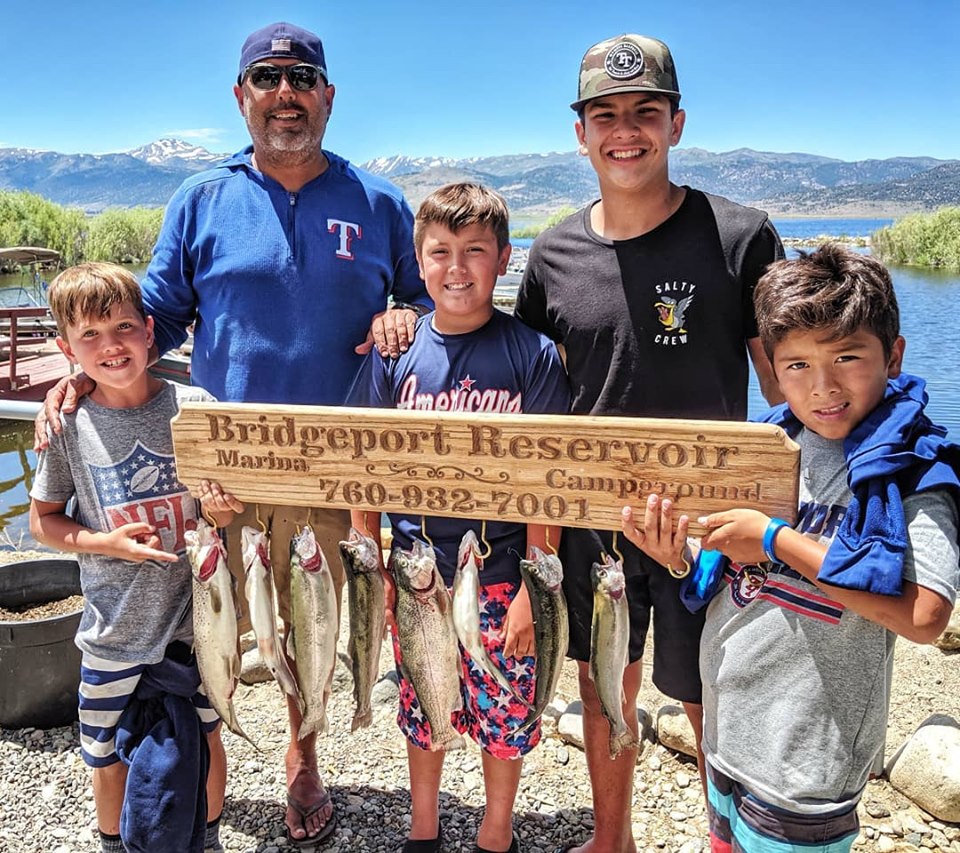 Is it just me or are the good fisher-people looking younger every day? Case in point: Trent Cairn, 14 years old and from the Los Angeles Metropolitan area, caught a 3.25 lb, BFEF tagged Rainbow while soaking a worm with Grandpa Jack and friends Ken and Ray. Tegan Trigo of Ventura used all of the wisdom accumulated in his 9 years on the planet to nab a 3.5 lb. Rainbow that just could not resist his dangling worm. His prize also sported one of those BFEF tags that guarantees you an entry in to any Bridgeport Trout Tournament where you too could win a $500 cash prize. The Siegel and Duhig youngsters, visiting from Napa, CA., cleaned up while fishing with Ken and Ray, making their parents looking like mere rookies. Using PowerBait and worms, Brad Siegel, age 8, was the first to catch a fish – a nice plump Rainbow. His sister, Sydney, caught herself a similar sized fish in short order. Next up was Sydney Duhig, Ms. Siegel’s best buddy and as it turns out, master fish-slayer. This 10-year lass hoisted in a feisty 5 lb. Rainbow – sporting a BFEF tag - like she had been doing it forever. Brother Jimmy Duhig joined the Bridgeport Angler club too, making it a clean sweep among the kids. Oh, yeah, Mom Suzanne got in on the action, too (but her’s was reeeely small, right kids?).

Now that is not to say that the grown-ups weren’t jumping on some of the action and that folks of a – um – “certain age” weren’t dragging in the whoppers as well. Yep, even with those coveted tags. Ron Allen of Bridgeport caught a good size 4.7 lb. Rainbow using worms and Bruce Burns slipped in right behind him with a lesser sized 4.2 lb. and 4.4 lb. Rainbows but both of his had tags. The Bell’s of Bakersfield were back with pal Mike Shanley and after graciously forgiving me for screwing up their picture last week, showed me three nice Rainbows in their “fish bucket,” including Carla’s tagged Rainbow at 3.7 lb., and Cody’s untagged Rainbows at 3.3 lb. and 4.1 lb. Mike, sad to say, got skunked on this particular day but it is worth “honorable mention” to say that he got one weighing 4.4 lbs. last week. Marge and Frank Tanaka, two youthful seniors from Mission Hills who tool around the Reservoir in a classic 1954 Lonestar, collected more big trout to add to their “taggie” collection. Kaylin Yup and Junior Perez, young grown-ups from Temecula who are relatively new to the whole fishing thing, ventured out on the Reservoir with some jars of PowerBait and found a sweet spot that coughed up a few trout. Kaylin scored a 2.3 lb. Rainbow on PowerBait of the same name and Junior – get this – landed his first trout ever on Corn PowerBait – a 3.6 lb. Brown. Some bar to set for your first, huh?

Nick Gonzalez, a self-described trolling purist who trolled a Needlefish found himself the proud possessor of a 2.8 lb. Brown Trout. Seeking out the cooler waters of the Buckeye and Robinson creek channels, friends Matt Mrofka of Auburn and Brian Morgan of Alta got themselves a mess of fish, including Rainbow trout weighing 3 and 2.5 lbs, several smaller trout, and even three carp. Phil Braun of Reno, NV snagged a nice 3.5 ‘Bow while Bridgeport local Bob White of Paradise Shores managed three fish with BFEF tags, ranging in size from 3.2 to 3.5 lbs. And then there are the Whisands. Sigh. These Long Beach, CA., residents spend most of the season up here and have been doing so for 30 bazillion years. They go out just about every day, they bring in big fish just about every day. They only keep the larger tagged fish, releasing most of their catch. They are low key and generous to BFEF with donations and support. I keep trying to get them to adopt me, but … I MUST learn how to do their fishy-fishy chant! 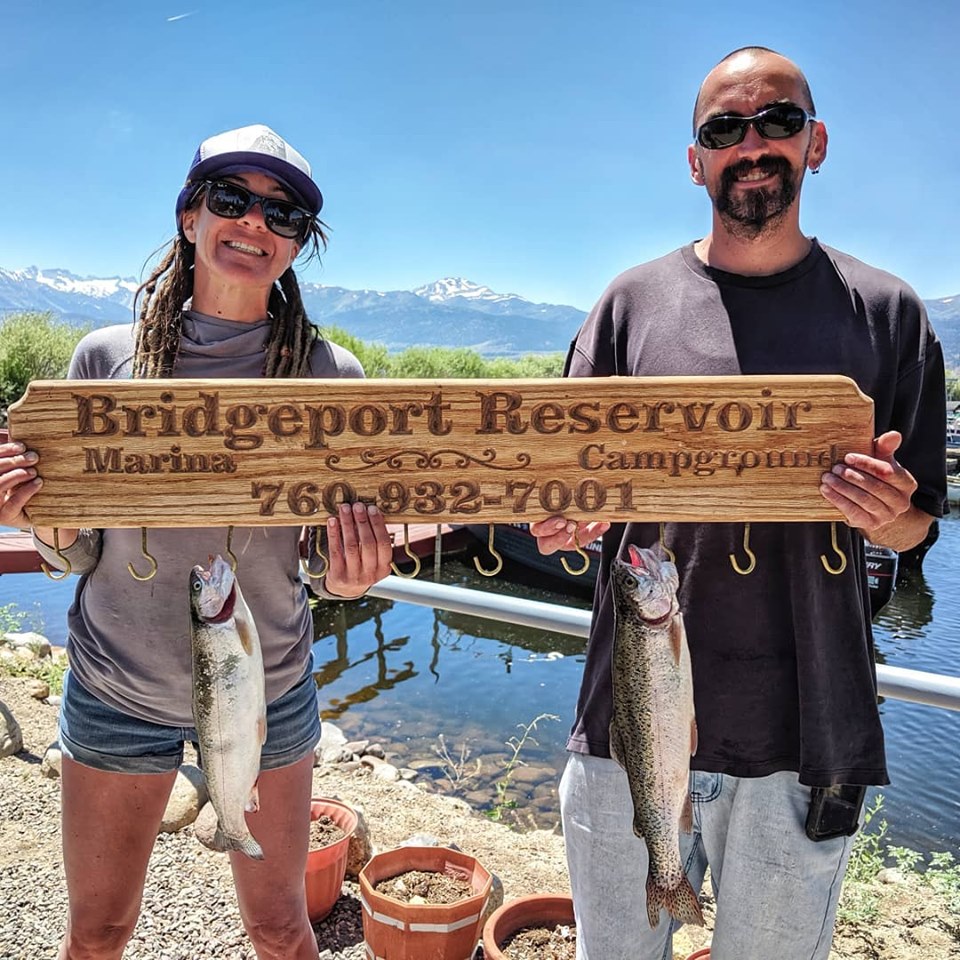 My budz Julie Jezsenka and Jeremy Manriquez got a nice one each here. Thanks for visiting guys!
Photo Credit: Courtesy of Bridgeport Marina Staff 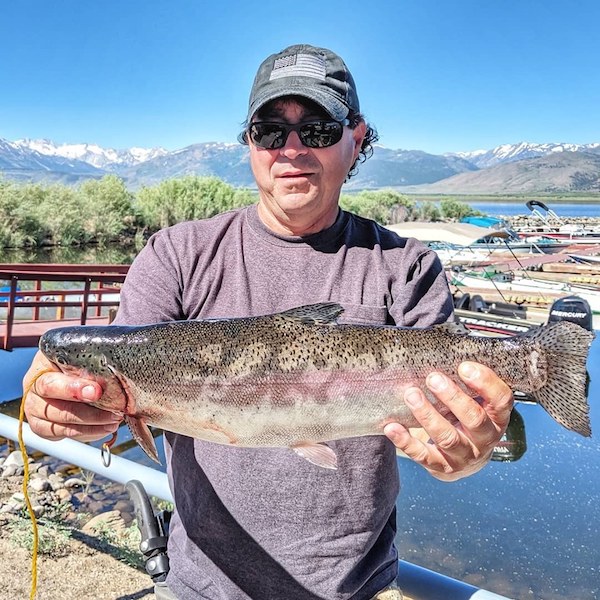 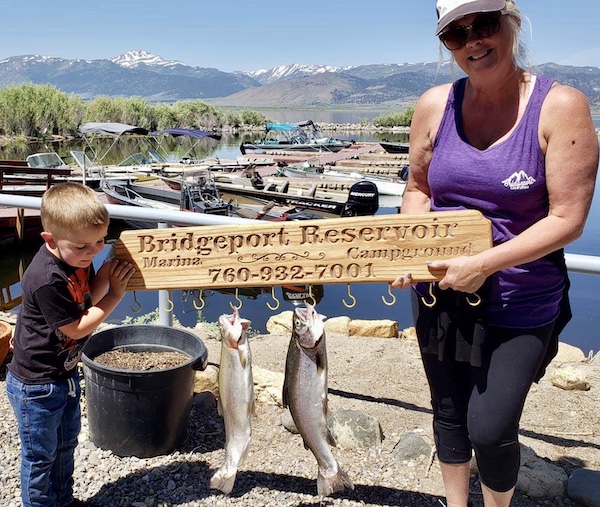