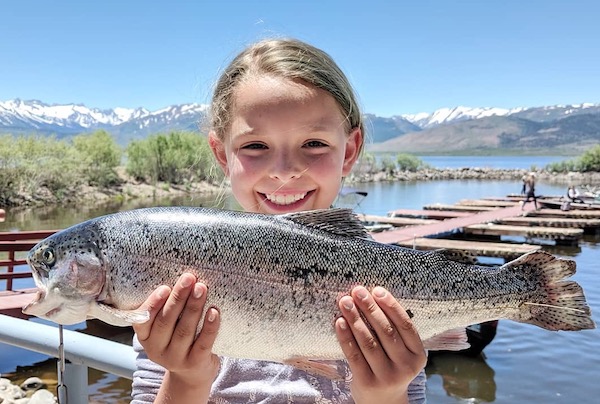 Whew! It has been a busy couple of weeks here at the Reservoir – blustery winds, calm, clear blue sky sunny days, back to back fishing tournaments, unbelievably gorgeous vermillion sunsets, and – wowzer – a bunch of really big fish! There IS a reason that people flock to this lake, despite the sometimes less than cooperative weather, and that is BIG fish and not just BIG fish for the local “fish whisperers” (you KNOW who you are)! You think “first timers” can’t get BIG fish? Tell that to young Garrett Mercier from Castaic, just two days past his 20th birthday, who dangled his inflated nightcrawler and caught his first trout ever: a 6.5 lb. BROWN TROUT! “Excited” does not have enough letters to express the joy on this young man’s face as he posed for his picture!

Although we did not have time to publish a fishing report last week, it does not mean fish were not caught! Cynthia Hayes of Cobb Mountain yanked in a tagged BFEF rainbow just in time on the 15th of June to get an entry into the fish tournament (more about that later). Buds Keith Gurrola and Phillip Cervante slipped over to Rainbow Point early one morning and enticed 5 Rainbows weighing 3.04, 2.96, 2.88, 1.5, and 1.0 pound on to their stringers using garlic and rainbow PowerBait as well as inflated nightcrawlers. Dan Sutherland of Carpenteria scored his fish-hunter moniker by pulling in Rainbow trout weighing 3.9, 2.7, and 2.3 lbs., also on PowerBait and crawlers. Confessing that he, too, “stooped” to bait dangling, John Hays of Cobb Mountain smiled wide and admitted he reeled in two 2.8 lb. and one 3.1 lb. while sitting still instead of trolling.  Hailing from Oak Glenn, Phillip TenPenny (tea, anyone?) used some worms and netted himself a 3.6 pounder on the 18th.

A few days of roudy winds slowed the fish take, but BFEF Tournament day rolled in with decidely delightful weather and anglers hit the Reservoir, hoping to scoop in the winning fish and claim all the glory. Debbie Fiori, all the way from Richmond, TX, used corn yellow PowerBait to bring in four fish with two of those weighing 2.8 and 2.2 lbs., respectively. Will Clayton, a Bridgeport local, parked himself with a nightcrawler or two and managed to grab a 3.4lb Rainbow for his efforts. Ron Karbowski of Ripon, CA. used sliding sinkers and inflated nightcrawlers to catch and release 14 trout, bringing home his prize of the day, a 4.76 lb. Rainbow. Alas for Ron neglected to enter the Tournament so failed to claim any prizes there! I would say “awwwww,” but as luck would have it, our own Bridgeport Reservoir staff member, Jack Peters of Walker Lake, borrowed the boss’ boat and hoisted in a 4.5 lb. keeper, and since he DID enter the tournament, he claimed the plaque and all the glory. He was a pretty happy guy and had big grins for the picture! But by far the best smile of the day belonged to little Lillyanne Larsen of Oakhurst, CA.  A winsome 8-year old with a penchant for fishing and a perky blond ponytail, she used a pinched nightcrawler to pull in a 3.72 lb. Rainbow and clinch the big fish trophy in the Junior Division. Ladies’ heavy stringer awards both featured Bridgeport Reservoir trout, with Karly Pemberton taking the award for the Junior’s with a total of 12 lb. 6 oz., while Sabrina Benson captured honors in the Adult Division for her multi-trout take of 8 lb. 13 oz.  Deserving at least honorable mention even though he opted to fish Lower Twin instead of the Reservoir, our own staffer Ronnie Allen locked up the Adult heaviest stringer award with a bunch of fish weighing in at 11 lbs., 8.5 oz. (Is this the right time to mention that a little girl aced him out size-wise in the heavy stringer category??)

On Sunday, the Hot Ticket Lure tournament had a small turn-out of 19 adults and 4 juniors but prizes were generous and smiles were big. Debra Ybarra smashed the big trout prize category with her 6.4 lb. tagged BFEF Rainbow, caught with a “JW Special” hot ticket lure, a hammered copper shiner named in memory of the former owner of the Bridgeport Reservoir and Marina Campground. She trolled the Buckeye and Robinson creek confluences to secure that monster and pocketed a cash prize of $270 for her efforts, with another $270 going in to the BFEF fish fund. Tommy Morton landed a 2.6 pounder also using a JW special to take the Junior category; his prize will be an entry into the 2020 BFEF Trout Tournament. Jimmy Smith of Oceanside bucked the trend and neither entered the tournament nor used the prescribed lure, but still managed to land a 4 lb. trout using midges and nightcrawlers.

Our resident “fish whispers,” Gail and Don Whisand, took their teenage grandson Mikey Paige of Perris Lake, CA out for a bit of worm dunking and guess what? The young man is apparently picking up the lingo, successfully netting himself a hefty 4.5 lb. Rainbow! Finally, the “most fun bunch of family” award goes to the Spittell gang, who have been hitting the Reservoir every year since 2009 as a sort of “guy-mance” family reunion. Mostly cousins with a few “hangers-on,” this bunch rents a pontoon for a week and hits the lake daily in a furious family trout tournament which results in the ceremonial award of the giant fish slayer trophy at the end of the week. And they are serious about their fun! Coming from all different parts of the country (Bridgeport and Chino, CA, Colony and Dallas, TX, and Chandler and Gilbert, AZ, Dave, Brian, Pete, Steve, Mark and Steven Spittell meet up with David Lee and Wayne Marshall, dump in some nightcrawlers and garlic PowerBait, and the fight is ON! Big fish in the 3 to 4 lb. range were not unusual, but Mark Spittell brought home the bacon (or should I say “trout”?) with a big ol’ Rainbow weighing a tidy 4.7 lbs. I’m pretty sure these buds will be back, if their big smiles at the end of the week were any indication.

We cannot close out our Bridgeport Reservoir Fishing Report for this two week period without a giant “THANK YOU” to all of the BFEF tournament participants (175 fisherpeople), the 210 people who packed Memorial Hall for a great dinner, raffle, and awards ceremony, and all of the selfless sponsors and supporters of the Bridgeport Fish Enhancement Foundation, without who we could not field all of the monster trout for which the Reservoir is famous! Congratulations also to Adult $500 cash prize award winner Bob Perch of Indio and Junior $500 scholarship award winner Moises Barajas of Bridgeport. Keep fishing! 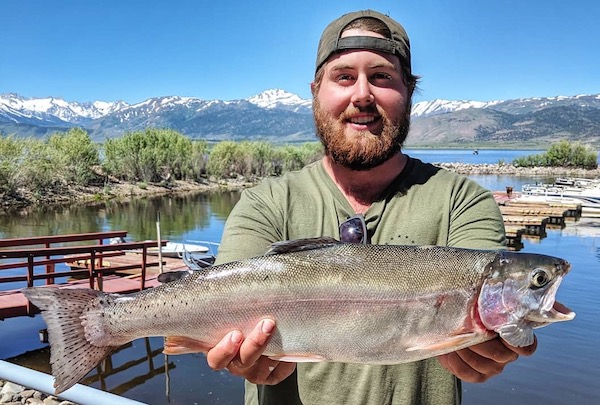 When the rental boat he reserved for the BFEF fishing tournament suddenly went down for maintenance, Jack Peters of Walker Lake, CA swung a sweet deal to borrow the boss’ boat and grabbed a 4.5 lb Rainbow in the process while floating a worm. Coincidentally, this big bow got him the win in the men’s big fish division!
Photo Credit: Courtesy of Bridgeport Marina Staff 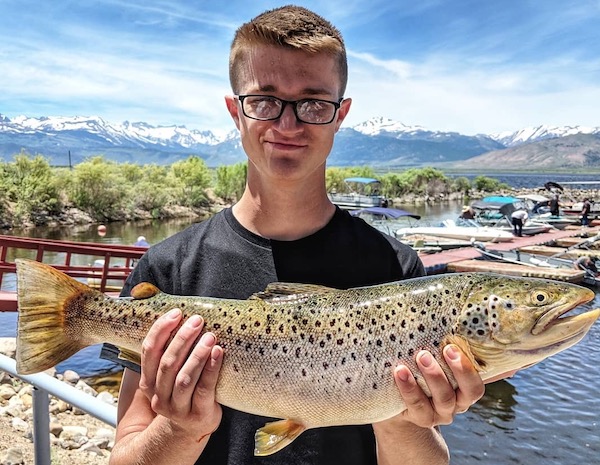 Can you say “My first trout”? Well that is what this is for Garrett Mercier of Castaic, just two days past his 20th birthday. Garret used a nightcrawler to reel in this 6.5 lb Brown in on his very first fishing experience in fresh waters. Safe to say he is now a convert.
Photo Credit: Courtesy of Bridgeport Marina Staff 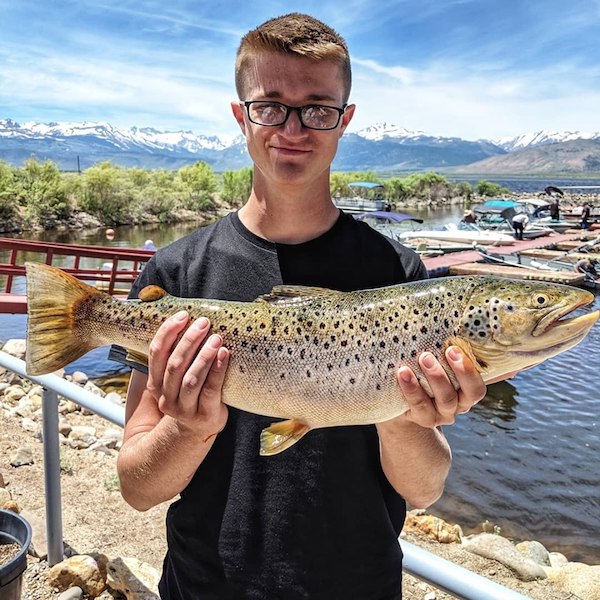 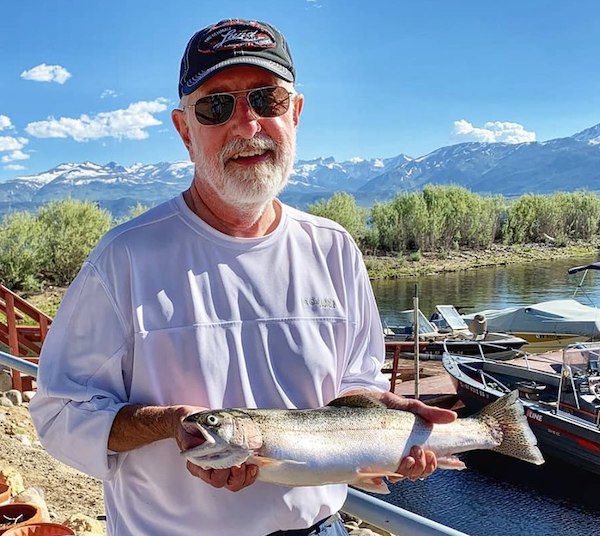