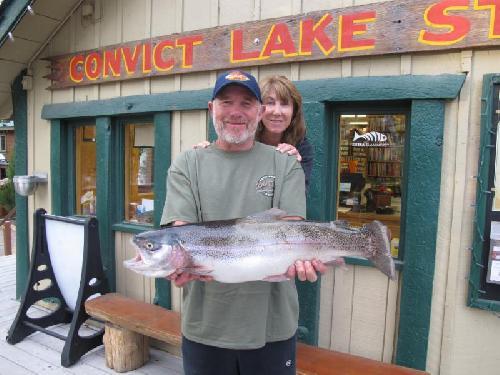 Another week and another record for the "Catch of the Week" was checked-in at the general store. This year the bar keeps being raised and a lot of quality fish have been pulled from the lake. This week we haven't seen as many but still had some nice fish to report.

Come join the fun this Fall! The Ambush at the Lake Fishing Derby runs until the end of the fishing season, November 15th. Don't miss out on a chance to win $6,000 in Resort Prizes! The Morrison Bonus Cash Weekend will be October 30th - November 1st. $2000 in cash prizes!

Catch of the Week: Dave Cavalli from Santa Barbara, CA had a number of nice fish this year but this one surpassed them all. Dave landed a monstrous 9 pound 11 ounce Rainbow. It may have weighed more because it was caught the evening before and didn't see a scale until the next morning. He was using Rainbow Garlic Powerbait while fishing the North Shore. Excellent catch, Dave!

Al Bentley from Austin, TX hooked a stout 6 pound 7 ounce Rainbow while fishing the North Shore. Al was fishing with a yellow Marvel Fly.
Gregory Tannourji from Riverside, CA caught a solid 6 pounder while fishing along the North Shore. Gregory was fishing with an Inflated Nightcrawler.
Tactics/Bait: If you are going to cast lures, I'd start with a Red/Gold or Frog pattern Thomas Buoyant. Other lures that were working included Rapalas, Kastmasters and Marvel Flies. If you are going to troll I'd tie on a Tasmanian Devil or a Needlefish. For the anglers that like to toss jigs, I'd go with either a Gulp Pinched Nightcrawler, Berkley Mice Tail or Berkley Worm rig. If you are going to drown some bait I'd go with Inflated Nightcrawlers, Salmon Eggs or Powerbait. The top Powerbait color was Rainbow. Any garlic Powerbait continued to drive the fish crazy. The most productive spot on the lake was the North Shore where the "Catch of the Week" was caught. Other locations to try would be the South Shore, Outlet/Jetty and Hangman's Tree. Here is a list of other baits/lures that can be productive: Sierra Slammers, Tasmanian Devil, green or brown Marvel Flies , Thomas Buoyants, Panther Martin, NeedleFish, Rooster Tails, and Bite-On Fury Shad on Powerbait. I would suggest using some type of added attractant. Pro-Cure, Bite-On, Lip Ripperz and Berkley all make excellent attractants, which are sold at the general store.

Weather: It's starting to feel more like Fall. The forecast is calling for a chance of showers at the beginning of the week with mostly sunny skies by mid week. The high temps for the start of next week will be in the mid-50's and the lows in the high-30's.