Winter Has Come to the Sierra's 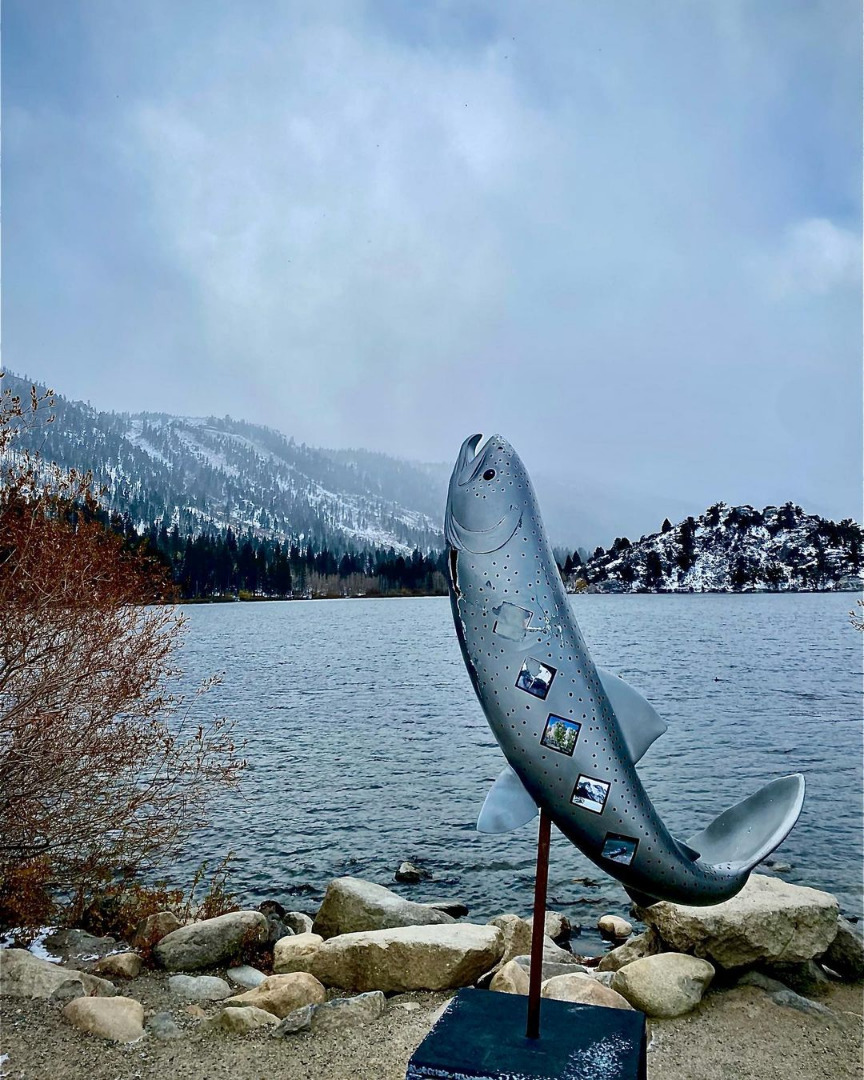 Hello fellow anglers. Oh, has winter come to the Sierra's? The month of November has given us the most snow totals in many locations since 1994. But we have a long way to go to fill up our lakes for the 2023 season. Although many anglers put up their gear for next year. For the true anglers, It is time to get out the coveralls and do some winter fishing.  Many of the local ponds and lakes in the area have started to freeze over. I ask you all not to venture out on the ice. All of our urban ponds are not stable enough to hold the weight of a person, and are extremely dangerous.  The higher lakes in the area will freeze over enough later in the season to do some ice fishing.  As of the 17th of November, fishing regulations have changed in California.

SILVER LAKE: The boat ramp is closed for the season, the lake level is low and the snow has flown. Ice has started to form around the edges of the lake.

CAPLES LAKE: The resort is closed for the season. The EID day use and ramp area has also closed. Ice has started to form along the spillway and the dam area. Most of the lake still had open water as of last weekend. I will let you know when the lake has enough ice to fish on.

RED LAKE: The lake had a thin sheet of ice on it as of last weekend. Right now it is not safe to venture out on.

BLUE LAKES: The road is closed now until the spring season.

BURNSIDE LAKE: Closed for the season

INDIAN CREEK RESERVOIR: The lake has some thin ice along the edges. Fishing has been fair for angler using green or Salmon Peach Powerbait. Inflated crawlers have been productive. I still recommend rinsing your fillets before freezing. The road into the lake has snow covering them. Use caution if you venture in.

CARSON RIVER EAST FORK/ MARKLEEVILLE CREEK ALPINE COUNTY: The river is flowing nice and very cold. Watch out for ice forming along the edges. Fishing is open for catch and release with artificial lures and flies with barbless hooks. The Carson River resort is open all year for cabin rentals and some RV hookups.

TOPAZ LAKE: Now open all year to fish. The NDOW has planted over 10,000 catchable trout over the last month. The Douglas County day use and baot ramp area is open. The water level has started to rise and the fishing has been fair to good for shore anglers. Boaters have been using black/silver or gold/white Rapalas. Small blades and a half a crawler have also been productive. I have not heard that Topaz Lodge will be holding a derby for 2023..

JUNE LAKE AREA: those nice Fall days we were enjoying in October ended with the arrival of November and some Winter type weather. Temps have dropped along with a few inches of snow on the 1st and over a foot this past Tuesday creating an earlier than usual shift to fishing the Upper Owens above Lake Crowley and Lower Owens Wild Trout Section below Pleasant Valley Campground. Both locations are open all year, barbless flies and lures only, catch and release. The general fishing season ends after the 15th in the Loop along with most of the Eastern Sierra waters except for some year round creeks which are becoming inaccessible.

Weather: The ten day forecast calls for mostly clear, sunny days and those lower temperatures. Here in June Lake we’re looking at lows from 12 to 20 degrees and highs mid 30s to low 40s. Upper Owens about the same come Friday. Lower Owens will be warmer like always which is a big reason I’ll be spending more of my fishing days there. Those temps to be low 20s for the lows and upper 40s to low 50s daytime.

Upper owens: Tuesday storm dropped about 12” of the white stuff at Benton Crossing. Even though it’s cold out there the sunny days and vehicle and foot traffic should help make it more manageable. I’ll be working the Upper into coming trips as it becomes more accessible unless more snow falls. Up until last year I would trudge upstream aways and fish back down to the Crossing but that’s a lot of work even though it can be some of the best fishing of the year for big Rainbows. We fly fish here similar to the Lower with those Caddis flies, Wooly Buggers, and Sheep Creek Specials. The best method though is tossing nymphs to the Rainbows lurking in the deep bends and cut banks. Favorite nymph is a Flashback Pheasant Tail on a jig hook. Other good choices are Zebra Midges, Prince Nymphs, Hare’s Ears, and Tricos.

Lower owens: We fly fish and lure fish in this section with similar results going with the lures mostly for a change of pace and don’t care if it’s windy. Both methods produce 6 to 12 mostly Browns up to 14”. Lure wise, pretty much sticking with Panther Martins, Thomas Bouyants, and Rapalas. Since it is catch and release I remove the belly hooks from the Rapalas. When fly fishing we use mostly an E.C.Caddis and Sheep Creek Special up and downstream and an olive or black Wooly Bugger downstream. Watch for a mid-day mayfly hatch and throw on a Blue Wing Olive or Caddis fly. This report was provided by my Friend and fellow angler, "Knot" Champion.

Good luck on your next fishing adventures. Stay off the ice! If you have a photo of your catch, send it to [email protected] Hope to see you on the waters soon. Goog fishin" and tight lines.

for Thursday, October 27th, 2022
: It's That Time of Year When Things Start Changing
Silver Lake: This time of year is great for the big mackinaws and browns
Caples Lake: The fishing has picked up dor rainbows and browns
Red Lake: Fishing has picked up a little from shore
Blue Lake Lower: Road may close at any time
Indian Creek Reservoir: The lake is low and the fishing has been fair to good
East Carson River (CA): A few nice cutthroat trout this week and a few small rainbows
Heenan Lake : Fishing has been good for fly anglers
Topaz Lake: Fishing has been very good for trollers
Gull Lake: Gull Lake Fishing Report
June Lake: June Lake Fishing Report
Silver Lake: The marina at Silver Lake Resort and the Forestry ramp is closed
Grant Lake: Grant Lake Fishing Report
Rush Creek: Closed to Fishing
Owens River - Section 3 - Upper (above Crowley): Perking up for larger Browns and Rainbows this past week
Bridgeport Reservoir: The lake level is low and the fishing has picked up for shore and boaters

for Friday, October 14th, 2022
: Fall is The Perfect Time of Year to Fish
Silver Lake: The fishing has been fair for shore anglers
Caples Lake: The water level is down, but they have slowed the outflow
Red Lake: Red Lake Report
Blue Lake Lower: Fishing has been on and off
West Carson River (CA): The river is very low
East Carson River (CA): East Carson River Report
Indian Creek Reservoir: Indian Creek Reservoir Report
Heenan Lake : The lake is open to fishing until the last day in October
Topaz Lake: Topaz Lake Fishing Report