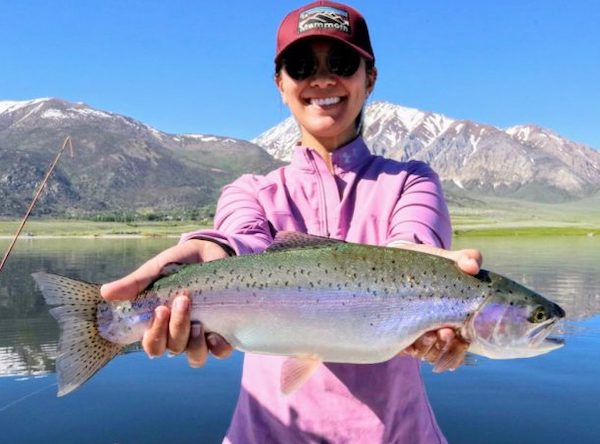 Fish’n Conditions
Warm weather has started the snow melting at a brisk pace.  The run-off is in full swing on most rivers and creeks. Crowley Lake and Bridgeport are gaining some water and rising daily. Crowley Lake bouncing back nicely from a slow down the last week as the big fish are now starting the migration into the shallow water zones. Damselfly hatch is right on cue this year and the fish are on them.  The East Walker River is still at high release rates, but it is slowly coming down. The Middle Owens River may actually be driftable later next month as they slow the release from Crowley and the lake begins to fill. This will in turn start some major weed growth along the banks along the lake. Hot Creek taking on lots of water, but fishing remains excellent despite heavier flow rates. Upper Owens River decent with dry flies and heavily weighted nymph rigs. The first official family summer weekend was a great success as our entire fleet and our extended fleet were out in full force getting the kids and parents on the fish!

Crowley Lake
The slow period required a lot of looking around and plying different water depths to locate solid concentrations of fish. We are happy to report that the first wave of the trout migration from deep to shallow water is now taking place. The damselfly nymphs are showing in greater numbers daily and the weed lines are becoming well established as the water level rises. Our assassin patterns are getting a lot of attention now hung over the weeds or along the edges as they imitate these little buggers. Some really nice rainbows and browns are being taken lately along with a solid mix of smaller and medium rainbows and browns. Not too many cutthroat yet, but they are just around the corner as the damselfly hatch and the soon-to-show callibaetis hatch will have all fish cruising the submerged weed beds in search of high protein. We still have some available dates left for the month and our fleet is ready to get you onto the fish. Top patterns: #16 Parallel Assassin Dark and Light, #18 Assassin Dark and Light, #16 and #18 FlashBack Pheasant Tail Tungsten Black Head, #18 Crystal Copper Chironomid Emerger, #18 Crystal Chironomid Emerger Black, #16 and #18 Crystal Copper Tiger Midge, #14 and #16 Broken Back Copper Tiger Midge.

Middle Owens River/Wild Trout Section (Bishop Area)
Flows holding at 400 cfs and if they drop soon we may start running early morning drifts down here. We have had some really good fishing in prior years during the summer months when conditions allow. Some caddis hatches taking place in the afternoons and tricos in the early morning along with smaller midges.

Hot Creek
Really good fishing here as the higher water has spread the fish out all over the creek. Best to work the slower seams and edges and don’t over look the deeper sections in slow and fast moving water. Some bigger rainbows and browns have been bending the rods deeply. Top patterns: #18 FlashBack Pheasant Tails Gold, #18 Broken Back Dark Zebra Midge, #16 Bead San Juan Worm, #14 Drifters Crawler in Red and Black.

Upper Owens River
Good dry fly action in the eddies and slow water as the caddis hatch is blowing up late mornings and into the afternoons. Early morning midge activity has the fish rising in the slower sections. Smaller nymphs like #18 FB Pheasant Tails in gold and black, #18 Copper Tiger Midge, #18 Zebra Midge, and SD Crawler red and black are getting fish.

This is a year around fishery with special regs in place. We walk and wade guide here.*Doug Rodricks, Doug Dolan, Hans Grotewold, and Devin Preston are under permit from the Inyo National Forest Service to guide Hot Creek.

East Walker River/Bridgeport Reservoir
High flows still but the river is coming down. If it drops another 100 cfs, it will be fishable in some spots if you know where they are. There are better options currently however. Bridgeport Reservoir on the slower side still but will soon turn on as the weed beds begin to establish themselves. This will draw in the fish to the channels as they begin to feed on damselfly and callibaetis nymphs. 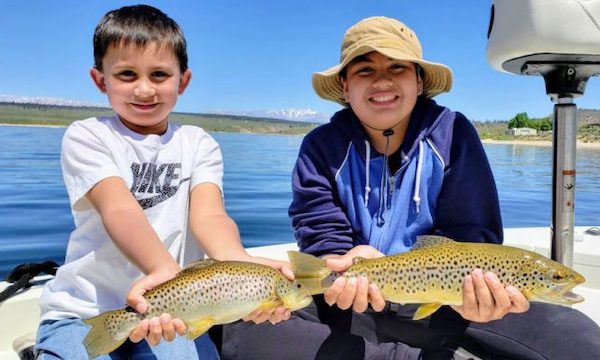 Connor and brother Cody with a double on some brownies!
Photo Credit: Courtesy of Sierra Drifters 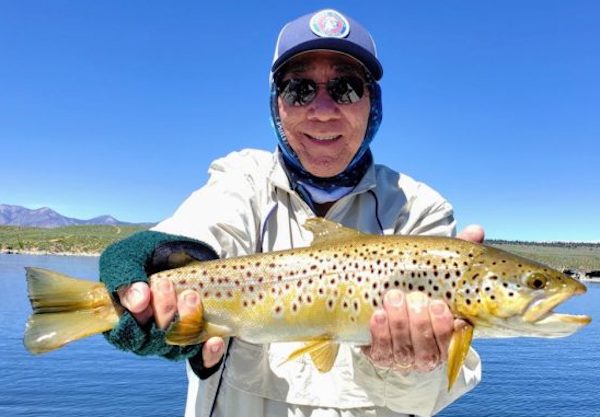 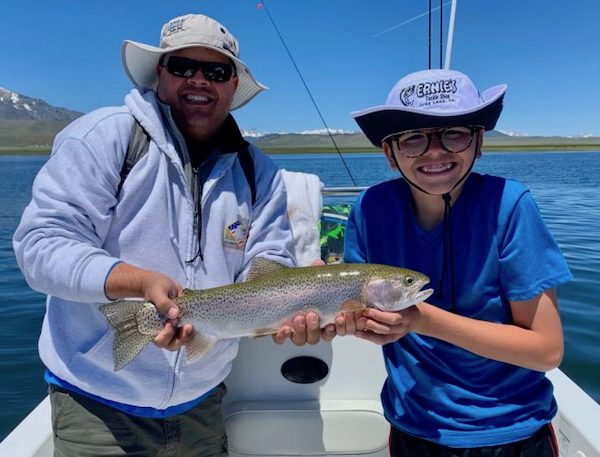 Moses and Max Bass with a “trout” not a bass out of McGee Bay! Uncle Phil Therrien was their guide.
Photo Credit: Courtesy of Sierra Drifters 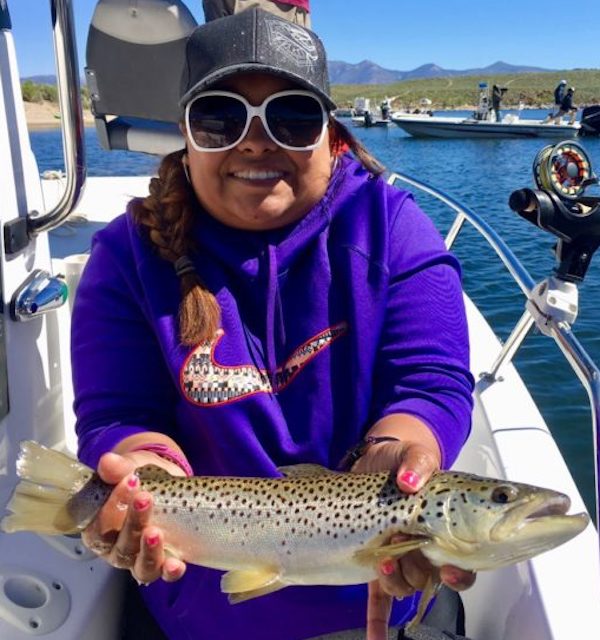 Devin Preston got Charlene Moen on some good ones like this nice brown!
Photo Credit: Courtesy of Sierra Drifters 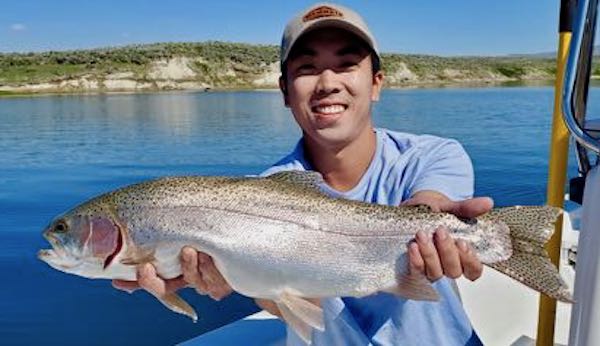 Drew Iida fished with Doug Dolan and got this “HOG”!
Photo Credit: Courtesy of Sierra Drifters 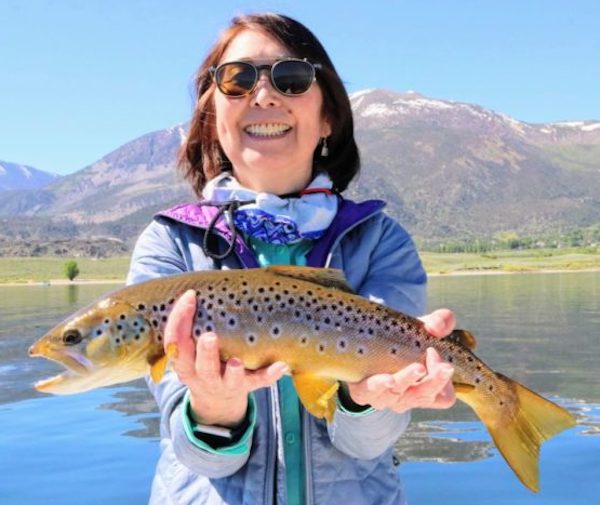 Jessica’s mom Meigan always gets into them!
Photo Credit: Courtesy of Sierra Drifters 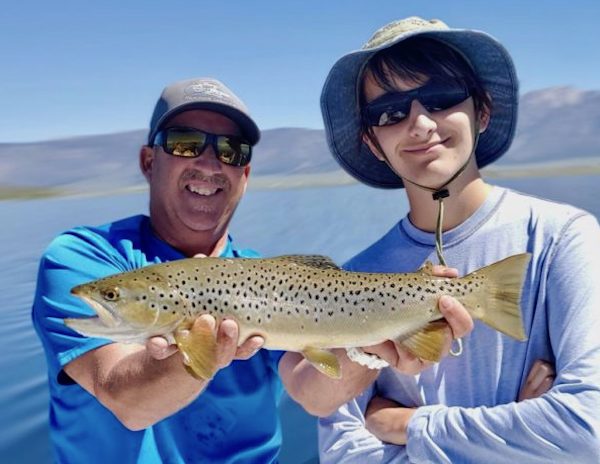 Nathaniel Estes poses with his catch as Doug Dolan does the holding!
Photo Credit: Courtesy of Sierra Drifters 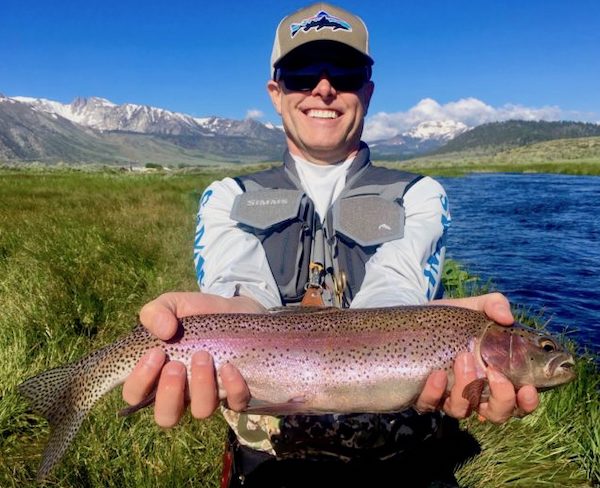 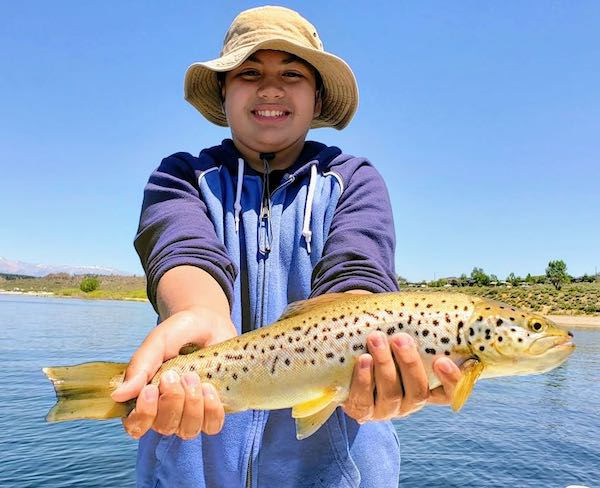 Connor Campbell with his first try on Crowley with a great brown!
Photo Credit: Courtesy of Sierra Drifters

: Fish N' Conditions
Crowley Lake: Some Days Are Diamonds Some Days Are Rocks
Owens River - Middle: Flows Have Jumped Up and Then Returned
Owens River - Section 3 - Upper (above Crowley): Water is Coming Through Fast
Hot Creek: Lots of Water Flowing 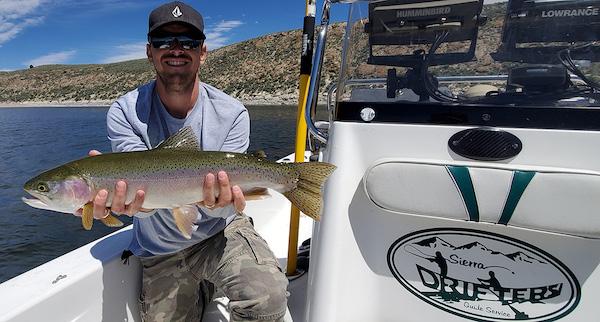