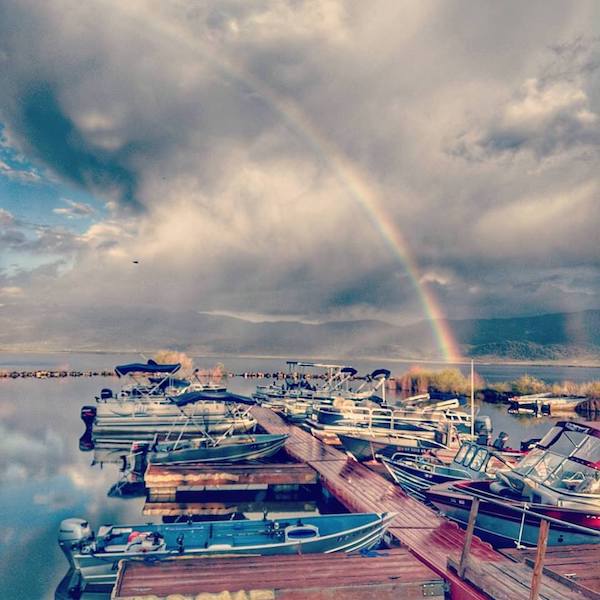 Hello fellow anglers,  The official start of summer is only two weeks away and the weather has started to cooperate. Many of the passes are opening and the higher lakes are thawing out. Winter seems to get longer and longer each year. So enjoy the next two weeks of spring, because I have a feeling its going to be a hot year. Fishing has started to pick up all over the area, and with the school year ending for most kids. We are now in full camping mode. There are still some areas that are closed, due to excessive winter we just had. I will try to keep you updated as the season progresses.

LAKE TAHOE: Mackinaw Lake trout fishing on Lake Tahoe is excellent right now for limits of 1 to  8 pounds . Cal Neva point, Sugar Pine point , Dollar Point , and the south shore shelf's are all heavily loaded with mackinaw lake trout . They are stuffed to the gills with shrimp, crawdads , and Kokanee Salmon . Dodgers and flashers trailed with a minnow are highly effective right now bouncing the bottom slowly. start in 80 feet and progress to 200 feet are the depths trolled for success . Morning is better than afternoon . Cave Rock , Lake Forrest , and Sand Harbor are open now. For more information call Gene St. Denis (530) 544-6552 Blue Ribbon Fishing Charters.

CAPLES LAKE: I have a report of the first catch of the season. Rob Bickor was casting a 1/4 oz spoon at the Woods Creek inlet and caught a nice rainbow trout. There is also some open waters by spillway and the dam. The resort is planning to open by this weekend. The lake is breaking up quickly and the boat ramp may be open in a couple weeks. This time of year is a good time to throw out and inflated night crawler for the big browns and rainbows. For more information stop by the Caples Lake Resort or call 209-258-8888.

RED LAKE: The lake is breaking up and should be ice free by the weekend, if the weather cooperates. The CDFW has scheduled a plant of rainbow and cutthroat trout.

WOODS LAKE: The road to the campground and lake was not open as of last weekend.

BLUE LAKES: The road is open to the 3rd gate. That is approx 4.5 miles in from highway 88.

SILVER LAKE: I have not had any reports on the ice conditions. I plan on checking the lake out this week and will let you know in my next report.

INDIAN CREEK RESERVOIR: Fishing has been good from shore. Green or yellow Powerbait has been most productive. Some angler have been throwing spinners or Kastmasters away from the weedy areas with good success. The water level is up and the lake is still fairly clear of weeds, but they will come in fast with our warming temperatures.

HIGHLAND LAKES:  Highway 4 over Ebbetts pass is open. The road into the lakes is still closed.

EAST FORK CARSON RIVER CALIFORNIA SIDE: The river is running good and very fishable. The river was stocked a few weeks ago by Alpine County. They also planted 400 Lohontan Cutthroat trout from Heenan Lake, with the average size of 2 lbs plus. Power eggs or salmon eggs have been most productive. Spinners have also been productive in the slower waters. For more information, stop by Todd's Bait and Tackle.

WEST FORK CARSON RIVER CALIFORNIA SIDE: The CDFW is scheduled to plant the river this week with catchable rainbows. Fishing has been good up in the Hope Valley area above Sorensons resort. Power bait or 1/2 a night crawler has been productive.

MARLEEVILLE CREEK: Fishing has been very good for small rainbows, with an occasional 2-3 pounder. Those were put in a couple weeks ago by Alpine County. Powerbait or mice tails have been most productive. For more information stop by Todd's Bait and Tackle.

SILVER CREEK: The CDFW is scheduled to plant the river this week with rainbow trout.

BRIDGEPORT RESERVOIR: Fishing has been good. Sterling and Regina Peters jumped at the first milder weather window, grabbed a rental boat, and got out their trolling gear. After sending red and gold Thomas Bouyants out during the morning, rumor has it that the missus soundly trounced the mister, bringing in the greater share of several plump Rainbows. Dave Jones used a Rapala with a brown trout pattern and wouldn’t you know it, caught himself a very respectable Brown weighing in at a shade under 3 lbs. Another angler, Mario Garcielita of Boyle Heights, trolled an unusual Rapala Silver Shad and collected three rainbows on his stringer despite mounting winds. Not to be outdone, former Bridgeport resident Mike Booher assembled a mass of Los Banos buddies and clobbered the resident Rainbow population, showcasing his own 4.8lb trout while William Gilardi managed to sneak up on the “top fish” honors by grabbing a 4.2 pounder for himself. Others in the group, including Jared Crist, Drake Cook, Alec Barcellos, and several young fish-slayers-in-training snatched up a multitude of rainbows that ranged from the pound to 2.5 lb. range. They reported that pink and green PowerBait and the ol’ trusty night crawlers enabled them to amass their impressive fish feed. A big group for sure! (Did I say “pontoon boats?” We have two now that are available for rent; they hold seven people each). Report provided by Chase at the Bridgeport Marina and Campground at 760-932-7001.

JUNE LAKE REPORT:June Lake Marina (760)648-7726  According to Abby fishing has been good mainly from boats at each end of the lake using the popular floating baits, jigging Sierra Slammers, and casting Thomas Bouyants and Kastmasters. Trolling is working well about five colors with Rapalas and Taz Devils. She adds that they are regularly releasing trophy size Oregon Rainbows from their pens.

Big Rock Resort (760)648-7717 Mike and Laurie tell me that fishing has been good from shore and boat for those who put in the time and effort considering the recent weather. One of his customers who Mike calls “Mr. Big Rock” brought in a beautiful 5lb-15oz Rainbow fly casting from shore. Stephanie from Glendale, Ca. proudly showed off a three fish stringer of Cutt-Bows including a nice three pounder. She was trolling with Dan from La Canada seven colors Bloody Rippers and Arctic Fox Tube Trolling Flies which are available at Ernie’s. Nice job Stephanie, and nice two-tone fingernails.

SILVER LAKE: Silver Lake Resort (760)648-7525  The Resort put in a load of about 1.5lb Oregon Rainbows prior to Memorial Day on top of a larger fish drop end of April. Lake has been fishing well for those with some perseverance and should improve with the coming warmer weather. Plenty of Browns, Rainbows, and Cutts have been brought into the scales in the 2 to 4lb range caught from boat and shore using Powerbait, night crawlers, jigs, and a variety of lures. As Tom at the dock always says you Must use 5 to 6’ of leader with floating baits at Silver. 2 to 3’ might work at other lakes but not here. Keep in mind the Resort will be holding their annual July 4th horseshoe tournament. Labor Day also.

RUSH CREEK: Flows have tapered off a bit recently allowing better access. We’ll see what effect the warmer temps and anticipated increase in run-off have. Recent catches include a 2lb-13oz Rainbow with salmon eggs. Go with eggs and crawlers with extra weight to get down in the flow and toss lures wherever you can.

GULL LAKE: Gull Lake Marina 760)648-7539  Gull has been slow due to the aforementioned conditions. Outside my window however I’ve seen more boats on the lake the past few days than the last couple weeks so surely things will pick up. The Marina hopes to bring in some Oregonian trout before the Fourth of July week. In the meantime there’s a lot of fish that have been put in during April/May that haven’t been caught because of the light pressure. For some fun try jigging for Perch along the reed bank. For more information call Ernie's Tackle and Ski Shop at 760-648-7756.

Good luck on your next fishing adventure. If you get a photo of your catch send it to [email protected] I hope to see you on the waters. Good fishin' and tight lines.


Good luck on your next fishing adventure. If you have a question or a report in our local fishing area, call the Naw line at 775-267-9722. If you have a photo of your catch, send it to [email protected]. Hope to see you on the waters. Good fishin' and tight lines.