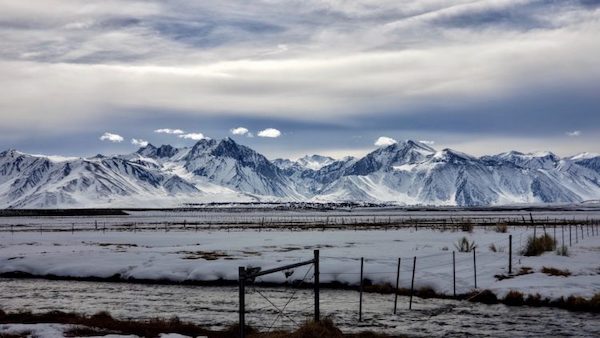 The biggest storm of the winter is upon us here as of this report. The upper elevations are getting hammered with feet of snow and road closures and blizzard warnings have been issued.  The first round brought some wetter snow and as the we get into the early week here some frigid temperatures will be bringing the snow level down to low elevations. This may be the one that drops a couple of feet on the Upper Owens River, but we will just have to wait and see. What makes this area so magical, is the huge storms of winter that come through for a day or two and leave blue skies and sunshine in their wake.  Some areas of the sierra are getting serious shots of snowfall, while others are not seeing as much. The fishing continues to be solid on the Upper Owens and we have been running the snowmobiles out to target the large rainbows. Hot Creek has also turned on in both the canyon sections for those willing to make the walk in and the interpretive site. The East Walker River has really gone into a good bite this month. Some large fish are showing and are willing to bite flies drifted properly. Middle Owens River flows have been holding steady with a solid BWO hatch mid-day. You will find browns and rainbows mixed together in the soft foam lines sipping mayflies during the hatch. Streamers are still getting the bigger fish out of the deeper water.

Middle Owens River/Wild Trout Section (Bishop Area)
The river is holding at 87 cfs. The latest rains may bring a bit of color into the river for a few days, but will clear up after some time. Some nice and steady Baetis hatches have been taking place around the 12:30 – 2pm window. Fishing seems to pick up from this point on, using dry flies fished in the softer sections and pulling smaller streamers like our #16 punk perch light and darks through the same areas. Pulling streamers in the deeper pools has still been the best for fooling the larger trout. Bishop creek has been adding a little more water to the river above Line Street and the water is a bit clearer up above. The wild trout section below Pleasant Valley Reservoir has been producing some decent wild browns. Smaller nymphs in the mornings and decent mayfly patterns during the afternoons have made for some fun fishing. Best flies for these area have been #10 Loebergs in all colors, #8 Spruce-a-bus in light and dark, #16 Punk Perch, #14 Crystal Leech, #18 Assassin Light, #16 San Juan Worm Red, #18 Blue Winged Olive, #22 Parachute Midge, #18 Broken Back Copper Tiger Midge, and #18 Crystal Caddis Larva Olive Dubbed-Black.

Upper Owens River
Very solid up here and the latest storm will definitely move more fish into the river. This has been the norm here with each passing storm. The snowbows have continued to push up river and congregate in the usual holding areas. The river is different from previous years, in that not all the usual areas are holding fish. We are finding new fish in some areas where they would never hold before. Covering water and knowing these zones will get you into them. It will get messy here soon with the new snowfall in the area. Be careful when driving in and out. There have been huge mud puddles on the access roads prior to the storms and many vehicles have required assistance getting un-stuck during the melt off periods. 6mm Otter Eggs in Tangerine Opaque, Kiwi Flash, Dead Egg, and Apricot, #14-16 San Juan worm red, #14-16 Level Crystal Leeches, #14-16 Parallel Assassin Dark and Light, and #16 Broken Back Copper Tiger Midge are lighting up the fish!

Hot Creek
Flows now at 9 cfs, but we can expect to see a jump in flows here if the weather decides to warm up after the storms roll through.  There’s been a great window for throwing dry flies (BWO’s) during the afternoons as the trout are really keying in on them. Otter eggs have been accounting for some bigger fish in the deeper runs. There is no drive in access now since the new snow has cut it off, so walking in will get you access to both the canyon and interpretive area.  #18 BWO’s, #18-22 Parachute midges, and Otter eggs and SD Crawlers have been getting some serious looks and takes from the resident trout.

East Walker River
It’s a solid winter bite here lately and for whatever reason, light angling pressure. My favorite days here are smack in the middle of a snow storm, but all the days around them are great too. Some nice browns are chewing in all the usual deep holes now. Throw bigger flies if you’re after that trophy winter fish, but don’t be surprised when your smaller bug gets slurped up by that giant too. Otter eggs, #18 Copper Tiger Midges, #14-16 Parallel Perch, #14-16 Level Leeches, and Assassins dark and light both Parallel and normal have been great patterns to hang. SJ worms and Drifters’ Crawlers also working well.

Pyramid Lake
Some big boys and girls have been coming to shore this week and the winter storms have been bringing more fish closer the beach. Anglers are seeing quite a few fish in the 3-6lb mark with some standout 19lbers in the mix. Give us a call if you are interested in fishing this area as we have dates available for the remainder of the month. 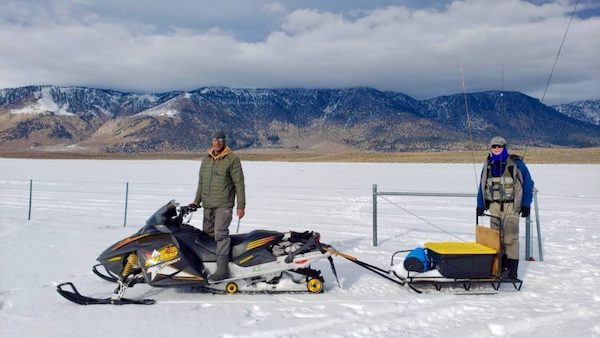 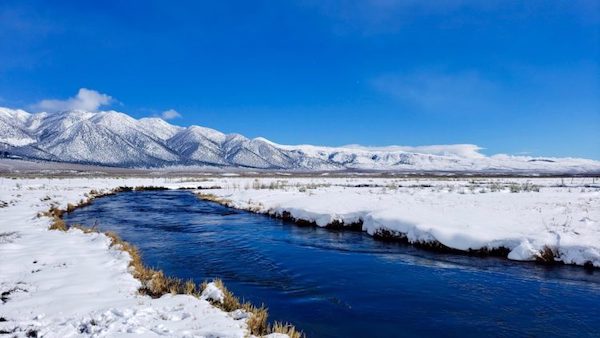